A few days in Rome

A few days in Rome

With the boys on school holiday, and Mishka badly needing a break from the hectic days at home so far this year, I took the 3 of them to Rome, one of my favourite cities (along with Zurich, Venice, Sydney, Benares, Kyoto, Naples, Jerusalem, Barcelona, Paris, Berlin, New York – and of course my home town, London), remembering the great explorations of this Eternal City I made in the 70’s and 80’s…

For most of the time there it rained, we did have one clear day but  for the rest it rained and rained, over & over again – and the moment it started again out came the umbrella sellers, many dozens of them (mostly it seemed from India and Sri Lanka) , offering umbrellas for €5, or €10 for the bigger ones – umbrellas that were almost guaranteed to fall apart within 24 hours (so you had to buy a new one), and so it was. From then on we travelled to town armed with sturdy umbrellas  from the hotel – quite a sight on the streets, thousands of Romans and visitors carrying these air tents aloft on the narrow pavements, dodging one another…It was also pretty cold most of our time there.

And – sad to see – beggars everywhere; mostly ancient ladies with their arms outstretched or bent over as if praying for some coins from passers-by.

Still, we managed to get around to most of the famous sites: the Trevi Fountain – huge and bang in the middle of the city, Piazza Navona (of which I had wonderful memories), the Spanish Steps, the Colosseum,
The Pantheon, the huge monument of Vittorio Emanuele, and of course, finally St Peter’s and the Vatican.

For me it was nothing like my earlier visits. Where then there were a few dozen people at the sites I visited, this time there were hundreds – or even thousands. In those days there was not yet this cheap air travel allowing most people to pop over to such places for a weekend for just a small charge. For instance I remember then simply walking into the Sistine Chapel to look at the Michelangelo masterpiece, the Creation of Adam, with a few others; now you have to book a visit to see it, online!

However the trip was not for me but for the other three – and these youngsters had me walking and walking – they, full of vim, walked me off my feet for hours on end, giving me blisters on my feet and, after some hours, a tired body; but mostly I was ‘game’ and able – and surrendered to the wishes of the family, tagging along…

After all that, the boys were not particularly impressed with Rome, preferring Barcelona where we went together with them for a few days last year around this same time. The penultimate day though was ‘shopping day’  –Madi’s favourite occupation after football, and under his guidance Abechy joined in the game of filling shopping bags with t-shirts, jumpers, trousers, jackets – all for the spring and summer months to come – if they last that long.

Their highlights? For Madi, the big V.E. monument; for Abechy St Peter’s and its great square; for Mishka again the great V.E. monument, dominating that part of the town, the Trevi Fountain, definitely St Peter’s – and also the labyrinth of narrow alleys in the old city. 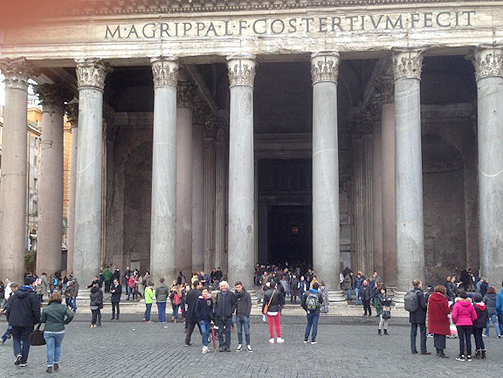 And we all enjoyed the meals we had, Mishka and I the wines, and the cappuccinos too.

It was a mistake to have booked a hotel so far from central town – a half-hour’s ride by shuttle bus each way, but al least there it was quiet.

The first day back in  Denzlingen, the sun was shining all day, the temperature around 16º or more, compared to the 11º or so in Rome.
So maybe – at least for that – it’s the Romans who should come to Denzlingen, and not vice versa.