First time there, in My Homeland, for 5 years. A Home Hit. It was certainly time to go again.

It was to be in Bath. A beautiful city. Abava picked Mishka & I up at Heathrow. 'Normally' it's a 90 minute ride down the A4, direct. But not this time. Friday afternoon. Taking evasive action we passed a totally stationary 12 mile queue of traffic, going the other way, probably would have been the same on our direct way to Bath too, so off we went south-west instead of west, via Salisbury, through marvellous countryside...

When we landed at Heathrow, looking out of the window, even there the grass was greener than anywhere else I have ever been. Astonishing.

Reminds me of the story of an American playing bowls on a bowling green in England on a visit, also remarking on the strength and colour of the grass, and asking the groundsman how it came to be so lush and fertile. He replied: Water it and roll it every day - for 400 years...

Anyway, the countryside en route to Bath, the way we went, was continuously beautiful, delighting Mishka, and though it took quite some hours we were in no big hurry and could enjoy this trip around one of the most beautiful parts of - often - beautiful England.

So we arrived in Bath, not unknown to me by any means, but it had been a while. It's a lovely city, far from London in many ways - quiet, marvellous old buildings, including its world-famous crescents, lots and lots of young people, many students, some tourists too, but the 'regular' state of the city showed strongly, and though the youngsters could be noisy, that noise was surrounded by a strong quietness and peace too.

The hotel where we were to stay was very fine, very prettily decorated, so was our room too - and the seminar was to be held also in that very place, in the basement, very cosy, not too large, again, like Corfu, but enough for the 26 people that we were. Apart from 3 new people, more or less all the others were from our regular seminars there over the last 20 years, so I've known them all that long too, and they travelled to join up again from far and wide, including from Scotland, so we could all meet up there again, in Bath.

On the first evening, soon after we began, I was amazed to feel an energy coming up from the ground, like a land fairy-spirit, embracing me from the waist down and pulling me down to unite with the earth.

This amazed me. I've lived in many countries, haven't spent more than seminar weekend time in England since 1980, did not (knowingly) miss it in this interval of total absence, felt myself to be a European and even a world citizen, having actually lived for quite a while in places like Australia & Japan, no attachment to my country of birth particularly, and here was the land of my homeland seeming to be reclaiming me!

At the first break I said to Mishka, "I have to move back here to England." "WHAT!!!" said she. Then I said, "Well, really I'm not going to, but maybe I should." It was all very comfortable there in Bath, I felt very much at home, and with all these people present with whom I felt deeply connected, somehow also on 'another level', as if, maybe, from my youth. And all that, being the first time like this, was all rather remarkable.

3 meals in Bath, outside, first Thai, then French, then Indian, and on each occasion I made the wrong choice, and could not take in what I ordered, though for my companions the meals were in each case absolutely okay. I'm sure this was no accident, some sort of message! Anyway, I had better luck in London later. 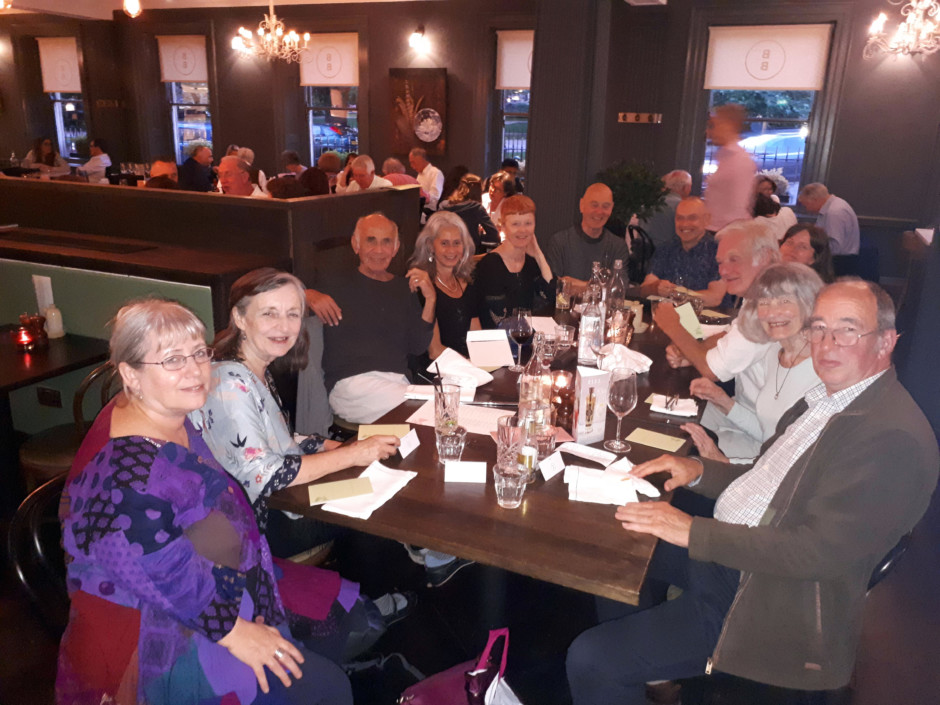 But at dinner on Saturday, they all sang - surprisingly to me (as it was nowhere on my mind one bit)! - Happy Birthday! And there were cards and gifts, still unopened, till 'the day' which as I write is tomorrow. And Byela baked a beautiful cake, which we all shared in too.

One new (young) Wild Goose was Natalie, grand-daughter of very longterm friend, Hiroshu, who if I remember rightly organized one of my very earliest Wild Goose seminars for me in Bournemouth, in the Nineties. Natalie, in her name-confirmation later, wrote: Thank you for a weekend in Bath I will never forget.
Her grandmama, Hiroshu, writes too: There are no thanks possible for the weekend in Bath with you. I feel energetic, uplifted, happy, grateful – your Presence, your ability to hold the vibration, your good humour. All the laughter, the beautiful music, the silent meditative moments, the expression of Love itself throughout the Goosie group, and I am delighted that my dearest, youngest family member (Natalie) has chosen this path.

There were many personal contributions to this Bath affair - from Abava & Byela of course, Gourishankar, Sanji & Kairavani, to put us all together on the map again.

One stand-out feature of this town Bath is the birds, the sky full of them, mostly seagulls, who fly zigzagging and crying all over the town, and at night time sound like monkeys.

So Monday morning we departed for the capital, where I was born and - apart from my three years at Cambridge at the University - always lived. Abava drove us to central London where we had booked a last-minute hotel room right in the very centre of London, between Leicester Square and Covent Garden. Very modern it was in many ways, we rather liked it. But what was entirely surprising was that in this area, including Soho, which (I thought) I knew like the back of my hand, now and again I got lost! Reason was, the streets - of course - were the same but a lot of the familiar shops I knew and had visited were no longer there, but replaced. Baffled me at times. Monday evening we went to the movies - again much change in the 'cinematic layout', and saw a great one: On Chesil Beach - based on a book which I read a few years back by the great English writer, Ian McEwan. As usual I could remember nothing of the plot from the book so it was all a surprise! Mishka loved it too. It also rather upset me so over dinner in Soho later I got banged for being so quiet and introspective, but later, forgiven!

Next day we had a date - with Pamela, my first wife, mother of Kozan, who, from Canada where she's lived since quite a while, is in London now for some months. Staying with her now for some days is our grandson Aranta, and his girlfriend, so we all met up for lunch in Hampstead, where I always lived in London, and it also happened to be on 5/6, Aranta's 27th birthday (also my mother's). After lunch we strolled down Haverstock Hill from central Hampstead till we came to where Pam and I lived together there in a block of flats, joining my mother whose flat it was, after our return from our 4-year world tour, till she died in 1968, and we stayed on there. Pam was telling me that when we lived there in the late Sixties and early Seventies we were paying a rent of £8 per week, now these flats cost £600 a week (they are in a very smart and desirable area). We all really enjoyed the reunion (Kozan joins them on 7/6, whilst on that day I have my own birthday celebration here, as I guess many of you know, but no big deal for that this year.)

After we separated I took Mishka - not far from there - to Hampstead Heath, my local park (but huge), which I visited hundreds of times in my youth.

Then it was time to get back to central London, to pick up our bags we had stored in our hotel, and then ride out 90 mins on the Underground to Heathrow 5. We left in time, landed in Basel on time, met there by Simitra, and were home exactly at midnight.

And the whole weekend was very close to being spoilt at the last minute. As, on the last lap home, coming off the motorway on a road through forest, we missed a roaming wild boar on the road, by inches...

We will make arrangements now to return again to England for a seminar next year. We were both next day in Denzlingen rather exhausted - mostly I think by the noise & bustle of London (where the energy did not pull me down into the pavements!), but already people are coming later today as I write, for my birthday tomorrow...

Finally, how's this for resonance (the basis of our Work together): On 5/6 I was in Hampstead, where I lived always in my London life, with Aranta my grandson, whose birthday it was that day. After lunch we walked down to the apartment block where I lived with my mother, until she died, and then afterwards in the same apartment for some years with my first wife Pamela, who was also there with Aranta and me (and his girlfriend) on that day, and then we all sat and had coffee and chatted in a cafe exactly below that apartment where we lived, first with my mother, and that same day 5/6 was also my mother's birthday. None of this planned. And it turned out perfect.