FROM THE OTHER SHORE

For the first time, after a host of other places over many years, we found ourselves at the Buddhist Centre there in Berlin, a very impressive place, we were given a huge room, with a giant golden Buddha at one end (see pic above!) and at the the other end, a number of large portraits of Buddhist teachers (see pic below!), and all around, on both sides of the room, a series of tankas (old-time Buddhist paintings). It was like being buried in Buddhism, so I began by lofting us all over it all, with a short talk, putting Buddhism and its teachings and aims in perspective - for Wild Geese anyway! (Zen Buddhism is something quite different, eg: one of its basic principles is: no dependence on words or letters.)

Well, in Q&A, in answer to a fairly desperate question, I talked about relationships with one's mother and sons, and that in the first case we're pretty helpless, mothers are always mothers, and mostly the same mothers as before, and in the case of sons - then, like that old English nursery rhyme:

Little Bo-Peep has lost her sheep
And doesn't know where to find them.
Leave them alone
And they'll come home,
Bringing their tails behind them.

If not always! If not guaranteed!

Being there in Berlin also gave me a chance of meeting my daughter Wu-Chi, who is at Uni there, and her very likeable partner, Jan - and also her mother Nimai, a Berlin resident, busy there with her practice.

Speaking of families - Disiray was (partly) there, her mother, my previous longterm and great Carer, Karanda, was there - and also Karanda's ex-husband, and Disiray's father, was with us on the seminar, for the first time, and joined the Wild Goose club.

There were large signs around the town saying: Perfekt, ist Europa nicht, aber ein verdammt guter Start. (May England end up staying part of it!)

Whilst I was there, Mishka was with Belgians (and others) in Antwerp, giving one of her dance workshops. These are much enjoyed, her feedback from those there is always terrific, and was again so. It's great that she now (like Tiago) is giving opening and joy now to those who join her. Soon she goes again to Kiev for another.

Ahead for me is beloved Copenhagen, always very resonant for me, then a weekend in Merrie England, in Bath again, and afterwards, a night in London, my very own home town.

Then comes our Get-Away time, with many others, in Corfu. A combination of Energytimes in the seminar, and free time on this beautiful vital island.

Spring has been pretty chaotic. I hope you've enjoyed that! But warm inviting weather is surely just around the corner!

Appreciate every day, and each & every moment in it. That is part of the Way! 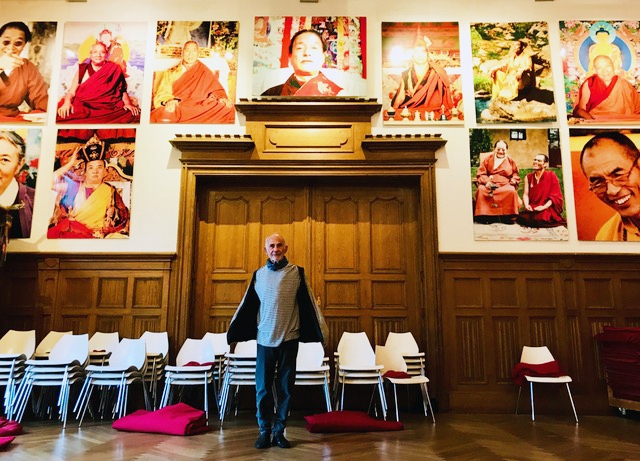