SUN IN THE HEART

It was the kind of affair, here in Corfu those 7 days, about which I believe, people will say in the future: Were you there?

The island was perfect, spring dawning, real spring with warm sun high into the twenties - rare even there for this time of the year, miraculous for us, amongst an entirely miraculous time, from first to last.

We 32 met for spiritual work each morning high up on a hill, in a grouproom beneath a cafe, so no distance for morning coffee break, and a short stroll, and once even for a Tao Walk, nothing higher there where we were, and directly far below us, the sea, the sea. Idyllic. 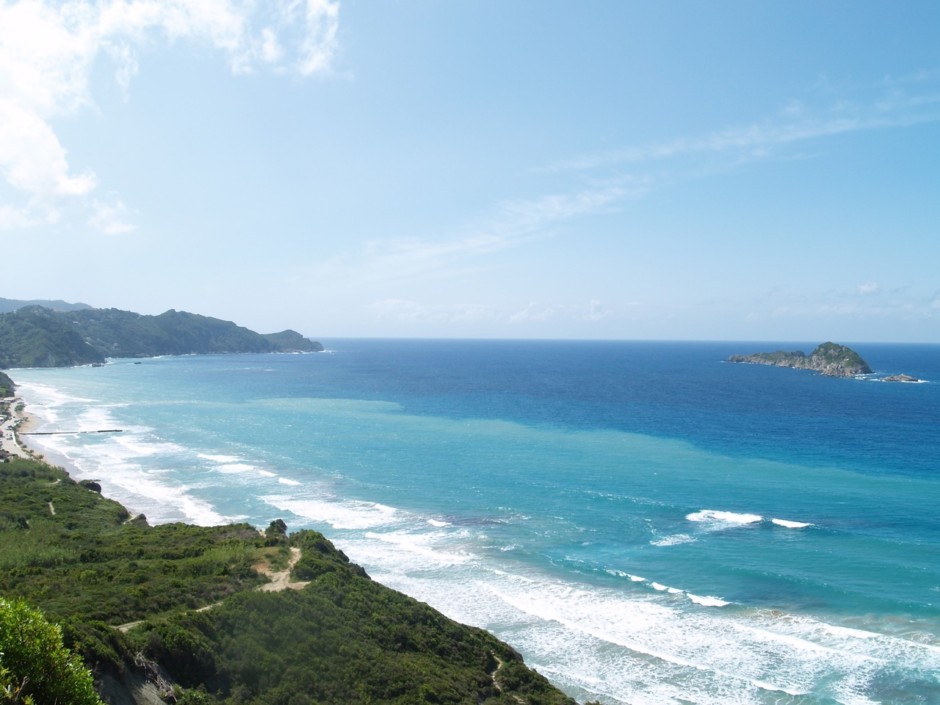 The afternoons spent according to each person's wishes, including lunch, either up there in the cafe, for a number of us, sometimes, but with a dozen alternatives in the village below, where too we all stayed in the same hotel - simple, pretty basic, but totally adequate to our wishes and needs. (Also in the village, a bar with huge screens showing English football - which I twice availed myself of to watch the Arsenal there - unfortunately losing in both cases!)

Then in the evenings we all met again at 7 to sit together in the super dome on the top of the hotel roof for an hour of meditation, including a spell of music. 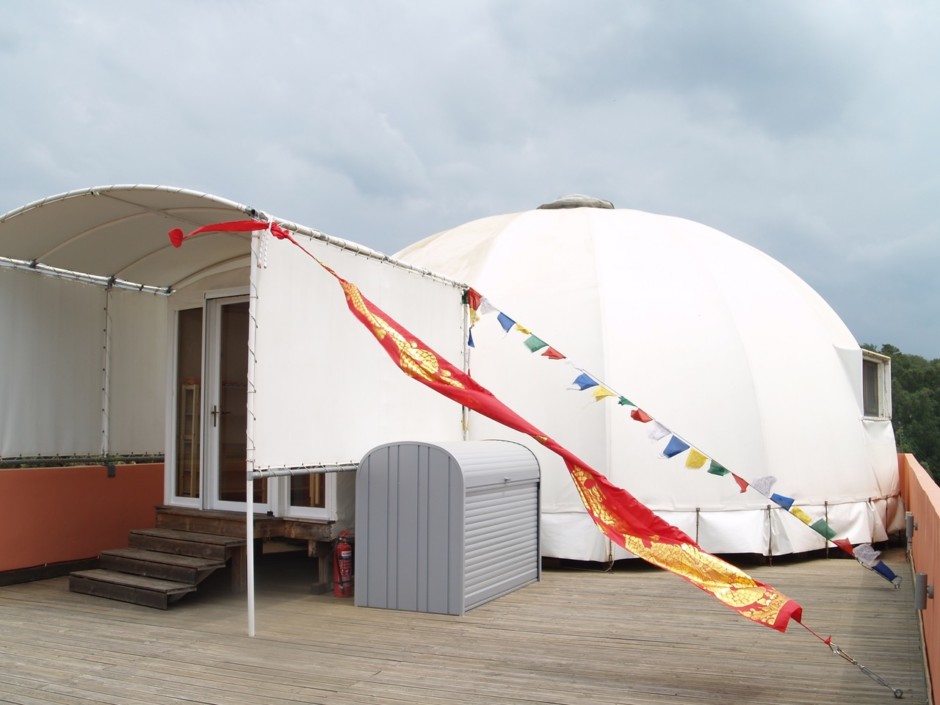 Then dinner there together for us all - always okay, and some liked it a lot, good Greek wine, and talks and laughter all over the patio by the swimming pool till around midnight. 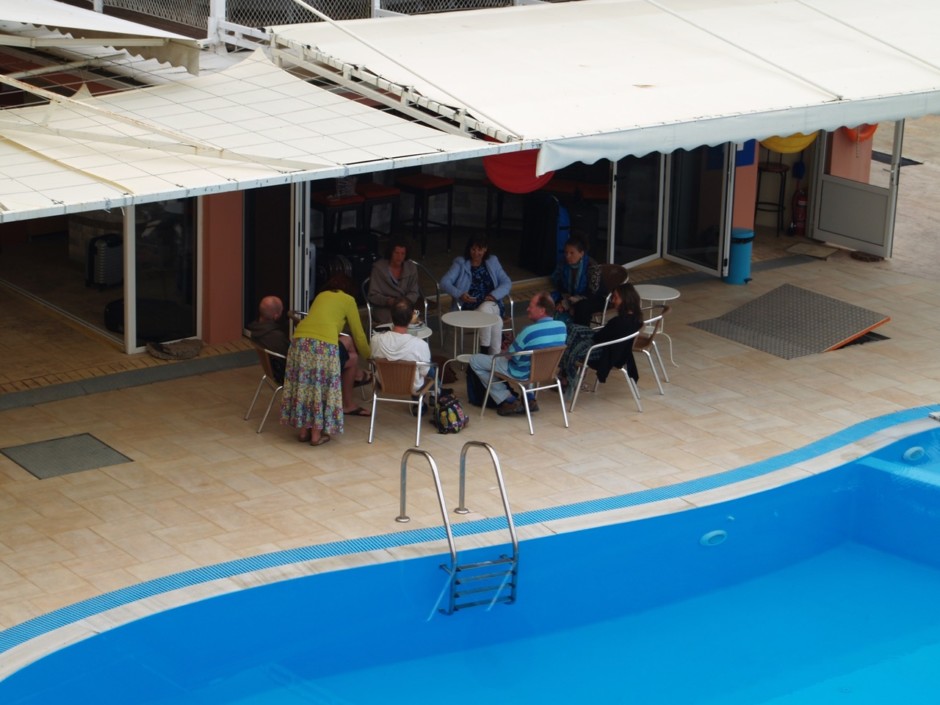 In the grouproom, mornings, it was very special, probably more than ever before anywhere. All present felt privileged to be there.

The cosmos descended on us, time and again, the spring energy of the island too, so this (rather tight) space we were in blew out to join the whole island that was burgeoning into spring, AND also in came the cosmos to envelop us in its wholeness and Natural Order.

Order. Man-made order never lasts, never can because one man's order is another man's tyranny.

In Iran, for example, the Mullahs create an order, which half the population rejects in their hearts. In Africa, the many dictators there dictate and make others obey, without real wide agreement of course. Saddam established order in Iraq, the West saw it as a pernicious order and booted him out - and what took its place? Nearer home, Hitler's Third Reich created too an order, which so many accepted and obeyed - and look where that led to...

Even today in Britain May and her team are creating a new order in my home country with Brexit, and for half the country this is not an order they wish for.

But the cosmic order, that descended into our Corfu space on Thursday morning, this was perfect, universal, and totally acceptable to us all, and these two morning sessions, including my talk on it all then, left Mishka in tears, she had also felt it, and I had then put it in words, and in context.

That is the only order that fits all.

We bathed in it.

The Talks were blasts from the Other Shore. First about being there, being first with yourself there, then also being with the others there, also being with this blessed island, with its wonderful spring energy, and of course being with the cosmos that was shining on us there with a big smile, much love, and heartfelt compassion (Talks: States of Simplicity and What is Always the Case), then some Michael-Encounter with some there - Everything is as Clear as Daylight, then about the special 'Visit' we had on Thursday: Finding the Hidden One-and-Only Order. And finally on Saturday morning the great Q&A entitled, When Everything Disappears ( be careful!)

The combination of seminar times and free times on the island worked wonderfully well, strongly contributing to the depths which we all reached, and also bringing the outer & the inner together in a very practical way for us all.

Disiray had organized this trip to Corfu singlehandedly.
And she continued to take care of much that went on there too, quite naturally. We all thank her very much for that.

Fortunately Mishka was with me - and with all things there! - so everything on an organizational as well as the personal level went perfectly well. She was appreciated and embraced by all, both as my partner and in her own right too, and they were all embraced by her too. Nice! 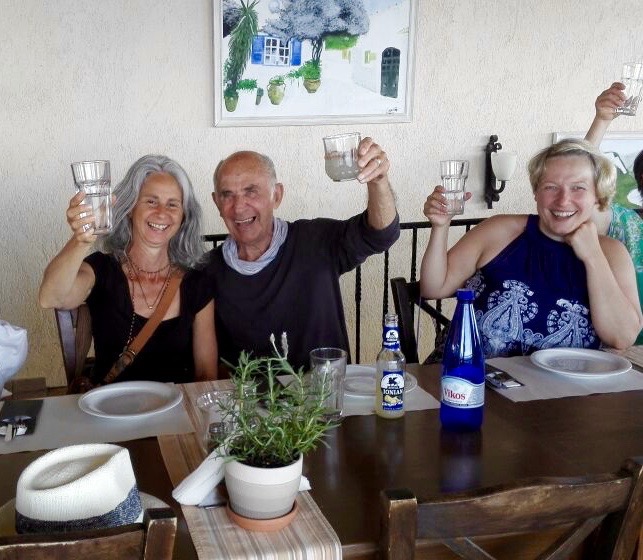 At the end we, Mishka and I, had some wonderful trips, up high to look at the famous Buddha Hall - a beautiful perfect space - big enough for a hundred people, and spent some time with the people who run it - a sannyasin lady, who of course knew me well, if not exactly personally, and her Belgian husband - and now we see if maybe we can hold our Corfu group next May, there. (More of that later).

Then to the space where our friends Miten and Deva play their music every summer - to great numbers of enthusiastic people (for those who don't know, Miten, now, after a time in Boulder, Colorado, recovering from a pretty severe heart operation, is already on tour - and is making a steady and strong recovery, joining in for sessions as he feels able to - for now.)

And also to see the Alexis Zorba Centre for seminars and stays, run by two ex-sannyasins there, one, Pari, wellknown to us from Rainbow and One Spirit Festivals over the years, where he also goes to make concerts with his wife, Satya, and this welcoming space is also a possibility for our next trip there next year.

Then later on Saturday, back to the hotel where we stayed, many of the people from the seminar still there, waiting to leave - reminding me of other years' January the Firsts, after our Winter Festivals and New Year celebrations...And then finally an hour or two on the beach, as the sun disappeared, just as we would soon...

So it was very very special time for all who managed to attend this Corfu seminar, Sun in the Heart - exceptional in fact, that was clear, and also, given what happened for us all, inevitable!

Mishka said at one point, All those who were not here should know that they missed something really Great!

Finally, a great feedback letter (one amongst many) from Luta:

Beloved Michael,
What a wonderful time in Corfu
I felt miracles, beauty, joy, love...... isn’t the whole world circling around that? 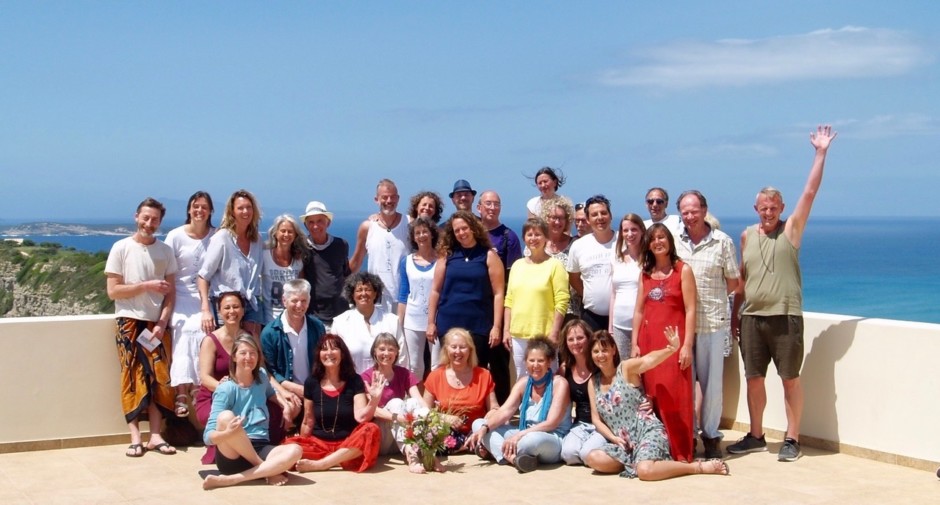 Now looking ahead - which I rarely do, except in blogs! - in a few days I visit Copenhagen - one of the main places that set me off on my own, after my Bhagwan time, in the early Eighties - and also ever since, so there are lots of very old friends there too, still coming to join me; then there's a day, Sunday 20/5, at the Rainbow Festival in  Freudenstadt, for a Talk and an Energy Happening, followed by a Home Seminar, 24-27 May, where we will look for the place that - as Buddha advised! - neither comes nor goes...

Then we are into June, beginning with a visit to my home country, after missing out on it there for the last 4 years, a great chance to reconnect with old friends, and practise again my English humour...then later in the month I'm again in Switzerland, and finally in June, many of us are off on the senior one year course, Trees and Rivers.

Then the summer brings, amongst other good things, the next and new OneLife Training OPT7. We know how valuable these OPTs are to the participants, so we invite al those looking for a jump within themselves and in their lives, to join up! Cracking off with our Summer Festival, again at Parimal...