WHEN THE HEART SMILES

This final Meeting of OPT6 contained all the ways I've worked in seminars from the very beginning. Including Zen-Hit Encounter, for a few lucky guys! For all that, I had to 'take over' most of the sessions! I'm told I did 15 sessions (plus SASH and PEP), whilst the teaching team did just 7 between them. I guess I got carried away by the energy provoked and lived by the participants during these 7 days...they were magnificent in their availability, and in their transformations...

At the beginning of the Training, all had made a 'self-drawing', and then again at the end, after the Tree Meditation, another. At the very end they were shown them both, the contrast - leading to hoots of laughter, sheer disbelief at the contrast, well we the teachers also had to laugh & laugh. Mostly the first pics were like bird droppings on paper, the last were bold and strong - and recognizable too! And all showed what had been gained - and also what remained to do. Magic.

This Training from the start was quite a mixture - past X-Runners, Love & Beauty people and Beginners. It all jelled wonderfully - and internationally too with participants from Australia, the Czech Republic, Ukraine, Germany, Denmark, Austria, Belgium, Switzerland, Holland. In this Energyfield though - all united.

Highpoints on this week: The Tao Walk in the countryside, with feedback afterwards, the Tree Meditation, 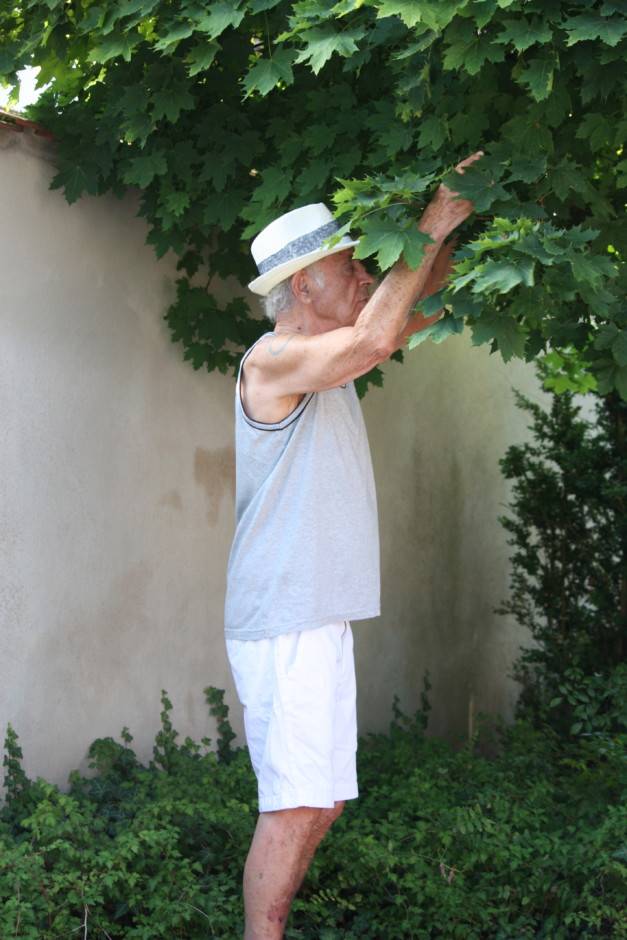 also with a great feedback session, then the afternoon & evening 'When the Heart Smiles Goes to Town' and the f/b on that too, the morning Bodyflows with Abava, always something different, and always with - at the end - some readings from the books by Tiago, a great 'Forest Dancing' session from Mishka, and also her 'Heart-Opening Meditation session, and towards the end, the resuscitation of Energy Dancing! Somehow missed out in the Trainings for many years, now revived, with Michael, then Mishka, then Tiago, then Abava (all veterans of course of this great energy play) showing the Training 'how it is done' - to great applause and amazement, and a shout of 'You guys are simply the best!'

Then on the last evening, after all dining together in X10 House, the participants 'put on a show' in the grouproom, Extraordinary Space (which after all these years it most certainly is), we were the audience - to songs with guitars, some of the words invented and about us, and then a cat-walk of Sheppy's hats 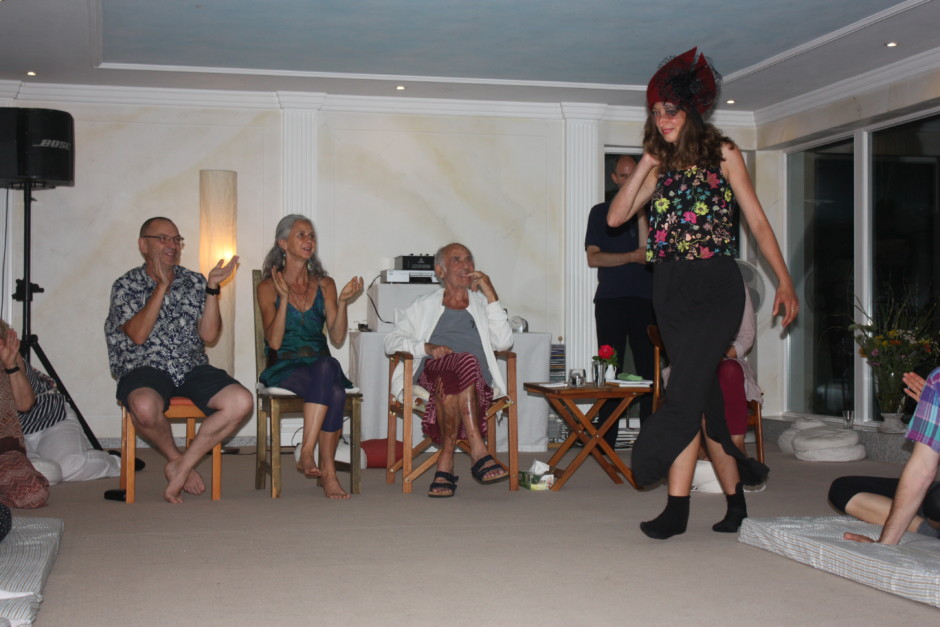 worn by members of the group, sometimes unrecognizable in their 'get-ups', parading up and down the aisle, with Rinzai a great - and cool - MC. 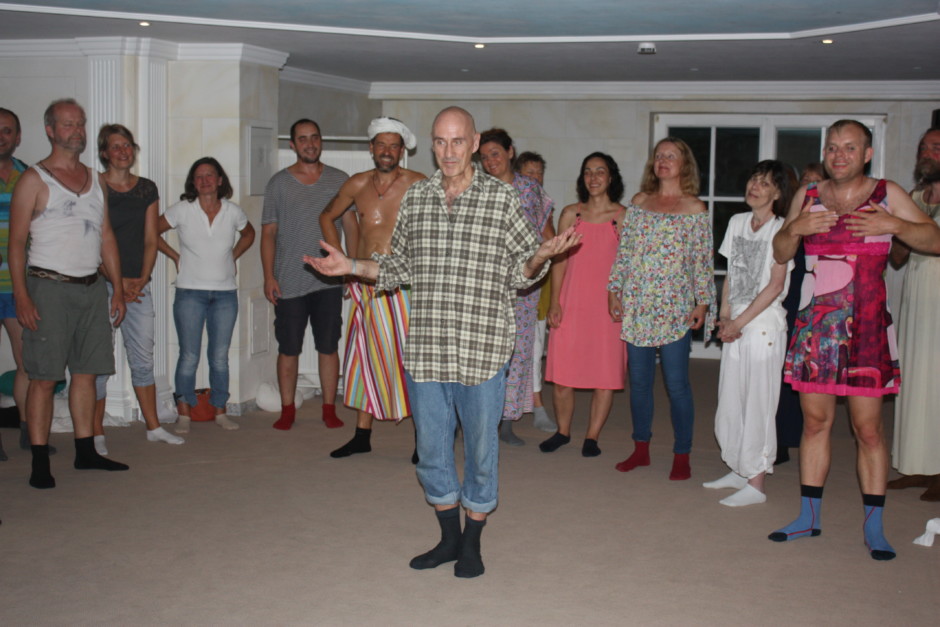 The weather was great throughout, so all meals, except the last dinner (in X10 House) were in the garden, and in 'the afternoon in the Energyfield' much was contributed to that garden - and elsewhere too of course.

On the last day, after lunch, all 26 members of this Training had a parting session, first with Michael, and then with the other 3 members of the Teaching Team. In the past my own sessions were mostly quite short, but not this time - many very personal sessions added on at this after-the-end goodbye episode, so it was already late when the 4 of us went off into town for our own goodbye curry together - and where too we shared reports on our final goodbye sessions - till 11, when the restaurant closed and we were asked to leave, and as we had not yet finished the exchanges we carried on here back at UNACHO - till 01.30 am!

The cooking and working Team was great. The Head-Cook, Disiray, said at the end that her 7 days here had seemed like just one, and how marvellous it was to 'be in the energy' of and from the Training, and at the same time to deal with all the jobs she and the others had to do.

Next up of course is The Summer Festival at Parimal, a bumper crowd is due, followed immediately by the first week here of OPT7.

The day after OPT6 finished was the 25th anniversary of the start of our relationship for Mishka and me, we went to Konstanz, a sweet little town on the lake which we really love. We had a super time there together, very harmonious, dinner in town till late, when it rained & rained - and although 'outside' we we were roof-covered, and then on Monday some shopping around, just for a few items to signify a celebration of this day, and what has passed, as the weather warmed up from 20º at breakfast in the hotel by the lake to 31º over lunch and as we left.

LOVE to You All!
Michael