Seminar in Bath :: A Blog

Seminar in Bath :: A Blog

THE EAGLE HAS LANDED

Ah! England! There is something there for me which exists nowhere else in the world. Perhaps not surprisingly. A completion, an embrace with the earlier part of my life, waiting for me always. The very soil, the atmosphere, the people, the language, London, where I was born & bred, in particular.

This time it electrified me, and also my relationship with those who came - many of whom have been with me for donkey's years (as we say). So it was old times, and new times too. How they connected with me! And the connections were timeless. This was so even with the few new people who joined us. It was like a family reunion in many ways.

In the grouproom there was such a unity - as in 'The United Kingdom', as where the Brits are, it is also known as.

This manifested itself again & again in the seminar - which again was in Bath, a beautiful country town in the west. Known as Bath Spa - which it has been since Roman times...

For example, on Sunday morning first session, I connected them all with one another, energetically - and which became somehow 'set'. After a while I played music, of different kinds, but none of it 'moved' them away from the original linkage, not a bit! The music was taken into the connections already made, and these stayed exactly as they were originally, till the break. Then, in the next session, when I worked as usual energetically with each and all, they all - as always - ended up on the floor. Then, as I sat on with them in silence for a while, one person sat up - and then, within one minute, everybody else sat up too! Uncanny!

As we were leaving the Francis Hotel - where, in the basement, the seminar had taken place - and where Mishka and I stayed also for the 3 nights there, the manageress said to us that the whole hotel was infused with a new peace & calm whilst we were there. Which was of course great to hear...and would we please come again!

There in the hotel on Saturday night we all - more or less - also had dinner together on a long table, which was much enjoyed.

Here, next, are a couple of feedback letters that I've since received. First from Hiroshu, WG since 1991, and who masterminded some of my earlier English groups there in Bournemouth where she lives, and where she also does herself occasional groups. Her granddaughter Duliya, who will hopefully join OPT8 in the summer, was also there, and this blog shows a sweet picture of them together: 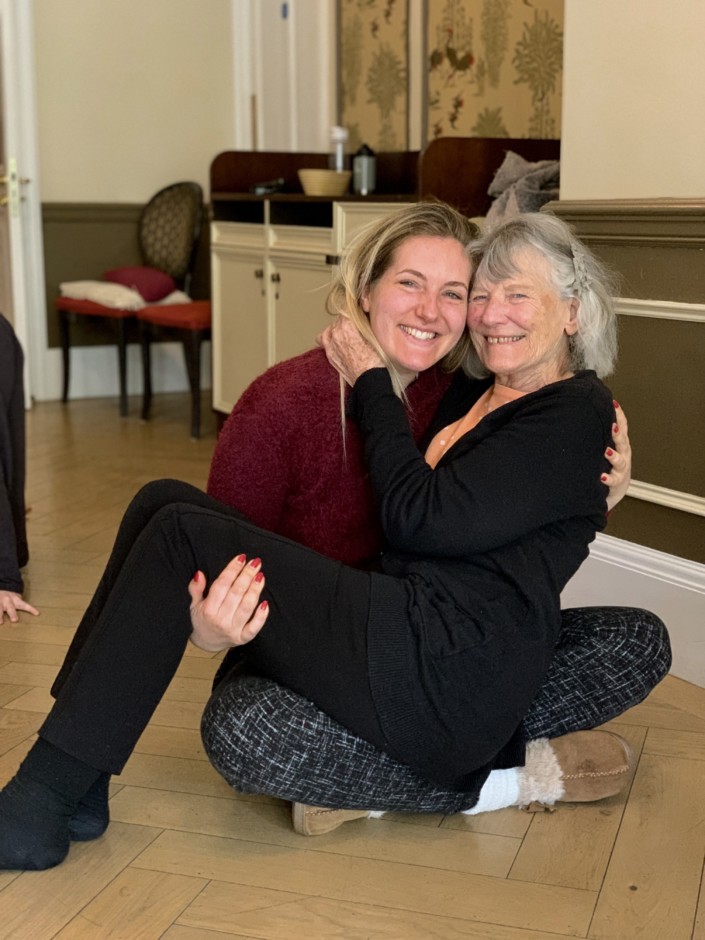 Beloved Michael, the weekend with you could not have been more beautiful, powerful, heart breakingly poignant, in me there is only Gratitude for you, and to you, for living your life as honestly as Love itself - and sharing it with us. You are such a sweetheart - and very funny. All possible Love to you and to your perfect Sweetheart, Mishka - gorgeous inside and out. Hiroshu

And from our Abava, partner in the OPT Trainings, longtime supporter of the English Energyfield:

What an amazing time we had, in Bath. I don't think I have ever experienced a weekend group like that, it was more like the culmination of a long training. From the first moment you sat with us, we dropped into a deep space and were held there to the very last...and beyond.

In my individual session, there is nowhere else I have experienced such a deep release and healing. And in the talk (Becoming Universal) every word was a direct transmission for me. With my appreciation and all my love, as always! Abava

After the group ended on Sunday, late afternoon - and what an ending it was to 'a certain music'! - nothing ever like it - we went with Abava and his wife Byela, who was also participating in the group , to their home in Bristol - just 20 kms or so west from Bath, to watch - Abava and I - the English Cup Final, won by the all-conquering Manchester City by six to nil, our viewing only interrupted (not live!) by a table take-away dinner for the 4 of us.

The next morning, Monday, Abava again came to the hotel to have a farewell coffee with us, then to take us to the train station in Bath, from where we travelled to Paddington, London, and from there to the hotel we were going to stay in, in Notting Hill Gate - a small neat one, everyone there so helpful and friendly - which anyway is a feature of people in Britain, almost always. We saw a movie in Mayfair, at a cinema, The Curzon, where I regularly went in my twenties, as it showed then movies often, there, which were not mainstream. It was a very good movie, the one we saw, and then afterwards we explored the area around there, known as Shepherd's Market - now utterly different from 'my day', a large companionable area, full of little streets and many many restaurants with a worldwide cuisine. We ended up in an Iranian, which included nice chats with the Iranian who was eating with a Turkish friend at the next door table. My meal there was not so tasty, I told them, so they didn't charge for it at all. Nice! The whole area is so international! As of course the whole of London now is too.

The next day, Tuesday, was our London day. We took the tube in to the West End, then it was walk, walk, walk - Soho, Covent Garden and then around Carnaby Street - made famous by The Beatles in the Sixties for its tailoring, but now completely transformed, at ground level and above, into another maze of shops, restaurants and cafes - unrecognizable from my London times even in the Sixties and Seventies. Relentless walking - easy for Mishka, but a bit of a struggle for me, so it was nice to end up - flat out - in the Russell Square park (see pic). 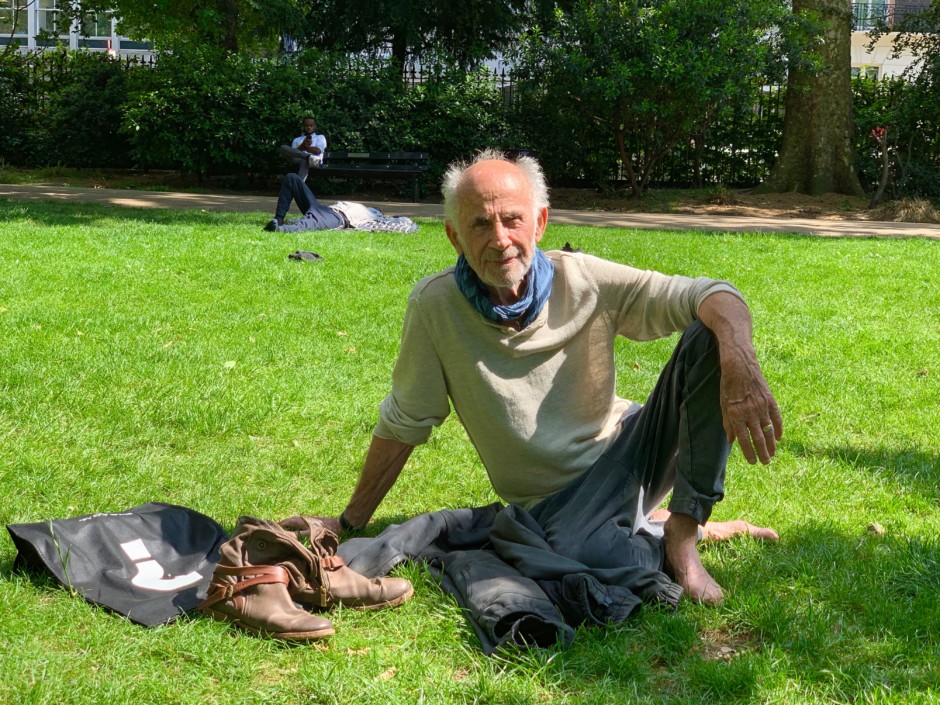 And a beautiful spring day it was too.

Then back to the hotel and taking the tube to Heathrow for our flight back to Basel - where we were sweetly met by our two boys, Madi, down briefly from Uni in Frankfurt, and Abechy, back from a week with friends in Hamburg.

Now we are here for just a few days. On Saturday we are off to Corfu, for a week's 'holiday seminar', plus for Mishka and me, a few days extra holiday on this great island, afterwards.

Sending Love to All You Guys!