Seminar in Corfu :: A Blog

Seminar in Corfu :: A Blog

THE CUP RUNNETH OVER

A lot of spiritual work goes on here too - especially in the area we again were - Arillas, exactly on the coast. I kept meeting people from 'the past' , even a few from 40 years ago, in Poona. So I'm still recognizable...

It's also where Deva Premal & Miten come every year for a while, Peter Makena too (but not this year) - all good friends of ours. And this year we had our seminar in the fabulous Buddha Hall, belonging to Vasanti and her guy Michel, high up in the hills over the town. She knew me in Poona and was very happy to host me/us and very gracious she was too. There also Mishka & I stayed - with a few others also - the rest coming up, down, up and down again, by shuttle service, so we missed long evenings together, but most of those shuttling were staying just outside town all pretty close together, so the unity continued.

The seminar was very strong, lots of new and very practical teachings. Most of the 30-odd participants were regulars, and so by now, also 'friends', so, though far away, there was also another very 'at-home' feeling about our group together. Many said it was a very memorable time together (see some feedback from some of them below).

There were 5 great talks ("all deeply profound" - Mishka). In the first, Let The Wind Blow (You Away), I was myself quite blown away, and whilst there (nowhere) I made this energy drawing to illustrate - that each moment is fresh, and without continuity with the past, there is always in fact a new beginning. 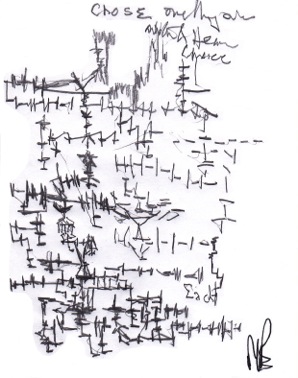 Then came It's All Up To You and then One Step Enlightenment (just take that one sure step out of 'yourself' and you are there (true!) (When the mind stops, the silence that comes is so beautiful!) Then a longer talk, Making Way, then Pass On! (a Wild Goose 'duty'!) and then the short Q&A: On The Mind. All really a book on their own...

We all met every morning for breakfast there and then from 10 till 13.30 we had our working time in this wonderful arena - very spacious, but still with our energy we filled it fine. Afternoons were free - everyone down in the town, meeting by chance (!) in restaurants and cafes, wandering around, on the beach - not that the weather was very favourable for that, throughout, never really warm, mostly cool winds, much poorer than it had been last year when we we were there a good month earlier, but it didn't stop the hardies from refreshing themselves in the cold sea every day. But not me!

But of course in the grouproom it did not matter, we created our own 'weather', and everyone had breakthroughs. We hosted 4 new people, all of whom joined the inner circle by receiving spiritual names - including a couple from Canada, who, it turned out, had been with me for a while in Brussels in the early Eighties, and then also on the longterm Qualing Group I did around then in Massachusetts. Also once or twice elsewhere over the years. A warm & welcome reunion.

The first morning after the group was over, Mishka & I went for breakfast high up over town to the place where last year the group had happened - beneath this cafe we were in. At first we were alone, but during the next hour half the group or more came also there for a coffee, spontaneously and separately.

An Energy Happening of another kind.

Early on there I slipped on the wet floor of the bathroom coming out the shower, and landed partly on the stone edge of the shower platform - very sharp! - and cut my arm open from elbow to wrist, so this had to be treated every day - by Mishka, and also (Dr) Anuradha, with aloe vera, propolis, honey - and bandage. At least, no complications and it is healing fine, but will still take a little time to completely heal.

If we go again next year it will not be till Ocotber, as around the time we like to go there, there is another rival celebration planned in our old fantastic home in Energy World in France, around 7/6. 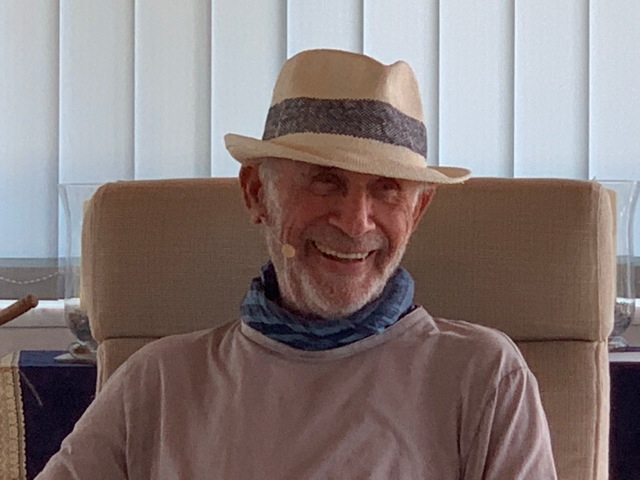 Now come some feedbacks from participants there in Corfu.

Writing you about the past days together in the Buddhahall is impossible. It would make it another experience, which it was not. You were gone and I could not let you go - how could I…
Most intimate, divine and blessed days. It was all One and Holy...Jila

Beloved Michael, Somehow it was the most beautiful seminar ever! To be with you in that room - so vibrant and the energy there demanded us to follow you to where you are. When the inner meets the outer and they become one. Overwhelming in its simplicity, without fireworks and bubbles of happiness. Nothing else, all gone...Just profound freedom. Nothing more beautiful than that. Magic days I will never forget. Shanti

One of our new Wild Geese, grandson of a longtermer, said that during a personal energy session he felt pure 'Joy' for the first time in his young life. He had even tried 'artificial' way of inducing it, to no avail...

Hitsu collapsed during our time together, had to be rushed in an ambulance to a clinic by the capital accompanied by the great Jila - had to stay the night there during tests, which at one point looked serious - then, fortunately - not! She writes: This group was the the most intense experience I ever went through. Physically speaking my collapse was a highway to hell, but at the same time a deep and new space opened for me. Even in the most anxious moments I never lost the trust that this was what had to happen, in this place, at this moment, in this great and loving company. After tears a new layer in me got unlocked and it seems as if a great transformation started. Love, Love, Hitsu.

It has been so great! As the title. Thank you for being with us. Astaranda.

Mahabodhi simply asked, Is there any space still left on the Summer Festival? !!

This time, Mishka & I finished up our stay on this wonderful island with 3/4 days staying at a house on the cliffs, right over the sea and beach, belonging to a sannyas guy called Nityananda - a house he had entirely constructed according to his own plans and intentions, and mostly with his own hands - and what a fantastic place it is in every way. Quite perfect for us, especially for Mishka, who every morning could scamper down the steep and irregular path (too much for me) for a beach run and a swim.

Monday it rained all day so we took a drive around the island in our hired car, finshing up in Kerkyra, the island capital - such a sweet little town! - where we had lunch.

Arriving Tuesday evening in Basel, being met by son Abechy, it was around 30º. When we left Corfu earlier it was around 19º, so weatherwise it all happened in reverse...

My first visit to Corfu was in 1967, on my return from a 4-year world trip. I had travelled overland to India in a Land Rover with 4 other guys, in the days, with visas, when you could: Yugoslavia, Hungary, Greece - Turkey - and then miraculously (today) Syria, Lebanon, Palestine, Jordan, Iraq, Iran, Pakistan, and finally to India. Then on to Nepal and the Himalayas. Back from there into India again, over to Calcutta in the East, the others took off back to England whilst I jumped ship and faced India alone - which I did in many directions, always by train, and then on to Ceylon, as it was still known as then. Marvellous. Just each day following my own inclinations, earning a bit of money by selling a series of articles about my journey, to the Hindustani Times, finishing up in northern India in Assam, where my Aunt Sarah lived with her great Swami Indian husband - since London times years before. Kozan's mother, Pamela, flew out to join me then, we got quickly married, Roman Catholic style (for Pam) at a tea plantation, with a host of little children singing some wellknown hymns - but in Hindi! A dream.

Later we left for Thailand, where we were adopted for a while, then Malaysia, and then on to Singapore, where I taught for a term at an English school there, delightfully.

Next it was a ship to Fremantle and Perth, where we stayed some while - whilst I taught Mathematics at an All-Girls school, and Pam worked here & there. Later it was over to Sydney, and teaching at another school, plus some articles written for a magazine there, and then after a couple of years down there altogether, we were sailing, again, to Japan, where we both taught English for nine or so months before returning overland - via Afghanistan, to Europe, by train and by hitchhiking - all the way to Greece, and from there a ferry to - Corfu.

Where it was another Corfu entirely. I think just one hotel then on the whole island, in the capital. We hired a scooter and took off into the interior - which took us back a hundred years or more, all the women dressed in conventional and traditional old-style Greek clothing, no vehicles, just donkeys, horses and carts, fields and trees and open space. Another world from how it is now...

The title, The Cup Runneth Over (actually it is - there, My Cup Runneth Over) is from the Biblical Psalms. Another from there is, And I will dwell in the House of My Lord for ever.

So now back home - to Friday, and a small birthday celebration, followed by, on Sunday, a couple of sessions - as always - at the One Spirit Festival at Freudenstadt, in the Black Forest, then a week later, a visit to Solothurn in Switzerland. Then quickly comes the last leg of our Trees & Rivers Course. Then my annual seminar in Vienna before, soon after this, the OPT Trainings: the 7th ending, the 8th beginning, and in between The Summer Festival, again in the embracing Parimal.