LIFT UP YOUR HEARTS

We were eighty, and in one session, with added guests from Parimal, just short of a hundred. Not much free space there, in the room, but we didn't need it.

Longterm WG Indro, now on OPT7, writes: This was the most intense group ever, for me. With uncountable precious moments. So much Love & Joy. What a big present. I feel totally blessed. With my infinite thankfulness. Love Indro

I guess that's about the size of it - for those who were there.

Even Aramani, a resident of Parimal, and also with a WG initiation, who came in for sessions here & there, writes: Imagine, for the first time at 58 years I notice that I expect punishment from teachers. Now, thanks to you, I have become totally aware of the opposite, in this summer festival with you. It makes me feel that you and all your precious friends only create precious gifts, like love, peace, be joyful inside & outside, allowed to be nobody, to trust to devotion, and to see that there is a lot of laughter and joy in life, and that to lose oneself is to find oneself. As soon as it fits I will send you a lemon cake.

PLUS (for some!) there was a cold pond there - which due to the flow of water from a source, stayed always at 15º, a boon in a week where every day it was over 30º - and more. Some, like Mishka, and also my two daughters, San Chi and Wu Chi, were up there and 'in' several times a day. Not being much of a water baby I made it there once, at least, and didn't find it so cold, but then, I didn't wait long to find out.

Then there was the evening, Friday, of the blood moon. Many of us walked up a hill (I got a ride most of the way!) so we could see it better. 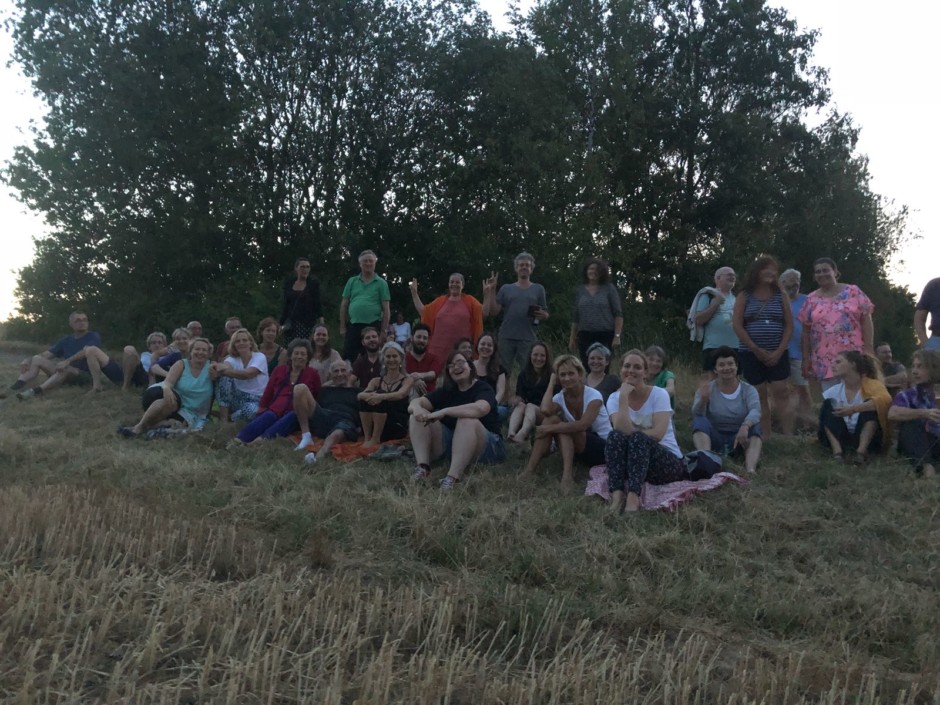 We had - from Google of course - the exact time it should come over the hill, but it did not, and not and not, and then we saw it, it had been over the hill a while but a mist of clouds had obscured it, but it was there whilst we were scratching our heads and complaining, so then we mostly all came down, and there in Parimal, outside the cafe which most of us used regularly or at some time or other, there she was, if not in her full red splendour, big and at least off-white! 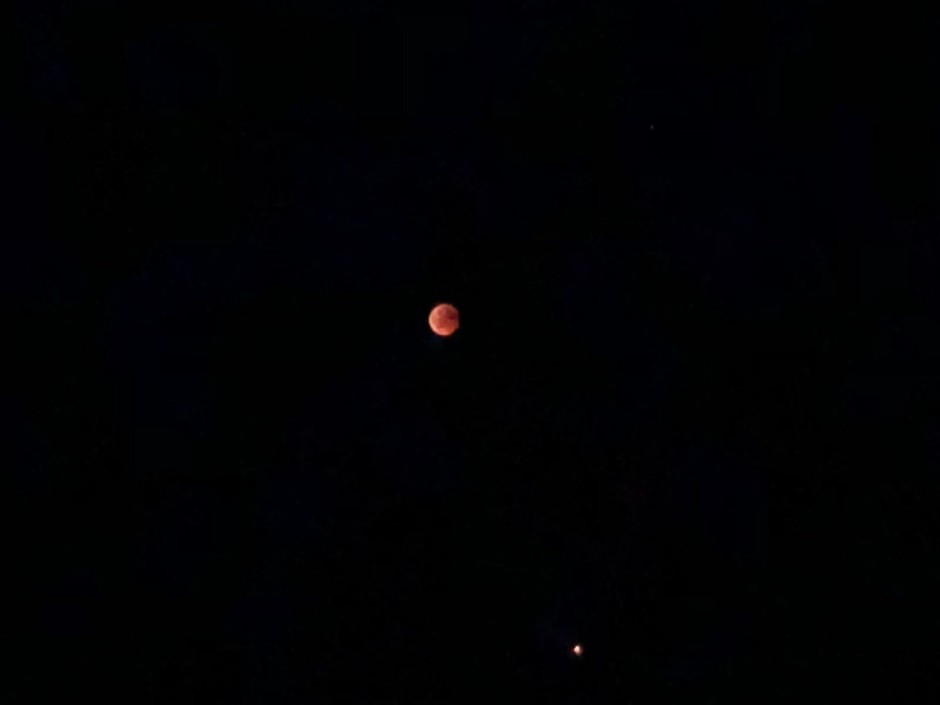 Saturday evening there was a wedding - a Wild Goose marriage for Imaho and Daivika, who were sitting in the middle of the front row all in white, holding hands, when I came into the seminar room for the last session. (Of course I ignored them until the time for the ceremony was ripe!). Then Imora played them a song, then some music and then champagne outside in the open area and then later on with their friends they celebrated in the bar - until it was WG disco time.

By this time I was tired, thought I'd just look in, sat on my chair watching for a while, but then came the firm invitation from Mishka to dance, (no gainsaying her!), so I struggled to my feet and obliged. The next thing was we had taken off into an amazing dance, soon joined by daughters Wu Chi & San Chi, everyone there stopped to watch and clap - and then after that, as someone said to me, the dancing really took off even after I left.

There were a number of 2nd generation Wild Geese there: Mandu, Vijo, Shunyata, Wu Chi and San Chi, Aranta, and Timora, and his girlfriend who was one of the new people taking a WG name, was just 19 too, so - good! We begin to hit the new generation!

Ten of those present decided during our time together there in Parimal to jump, a jump that took them on to the new OPT7, which, as I now write, starts tomorrow, Tuesday, with 25 (now, later, 27), plus maybe still to come another Jumper or two!

Sessions in the Festival? Let me see. One time there was the question, from me to all: What is the most important thing in Life? Of course there were the usual answers: Love, Peace, Joy, Relationship - many others - until 'old' WG Gyan got it right. How I cheered! What was the 'right' answer? Ask someone who was there! (You may be surprised!)

Then, in another session: You are totally alone in the world. AND then, on top of that, you are connected to everything. Guided. A marvellous meditation, life-changing for some. (Note: from the text for the Soma Meditation: Single-minded the world disappears; Coming up for air, you are never alone.)

Meetings with Graf Sittich Berlapsch - he owns the place, Parimal, started it off when he too was a sannyasin. I did a seminar there at his castle, looming up over Parimal, in 1981, with a huge number of people, in a marquee there, and we connected well. Then there he was, in Parimal, greeting me, and telling me he would be down the following evening with his new wife, and their three children. And so it was. For an hour he sat with us, talking about 'the old times', nonstop, and then they all popped into the disco. Then the next morning, Sunday, Mishka and I drove up there, met him on his way down,
jogging, and for an hour he showed us around his home, the castle, full of antiques, dungeons and cannon from the old days, a new (and very good!) restaurant, and so on.

When the Parimal guests joined us for their session, I told them that this time I would do nothing special with or for them. It was up to them to connect with all those on the seminar now in the room. So I did a long session of Diamond Yoga with everyone, and then in the end - well there was still some time! - I did give all 18 of them a personal energy session too...

Vikrant (sannyasin name) from Chile was also a participant in the Festival. We have been in contact for many years, by email and also with visits when he comes to Europe, here or to a seminar, Winter Festival etc. Then I gave him an interview. He puts out many books, he himself there in Chile is already a Big name in body therapy, and last time he came, WF in 2016, we did a long interview, and this time again to make some corrections to what I then said. Apart from that he had a great time and now as I write a mail comes in from him: A meeting in time - and out of it. Apart from the kindness of allowing me another interview, I cherished the spaces lived during the festival. They were rich, delightful, touching and profoundly meaningful for me. The original difficulty in sitting gave way to a wonderful explosion of bliss, which my body could only express in tears. Silence beyond the mind, beautifully connected to you and your people. Thank you.

We did the SHEM Meditation, and the Energy Release Med, and the shop sold out of both afterwards. I quoted them from the great Zen Master Dogen: If you commit yourself to the Path totally, you are sure to arrive. If you do not, then it's highly unlikely. So, as I tell you all again & again, take your choice - and no censure from me either way. If I lift up your hearts - that's altogether fine with me.

Then, all lying on the floor, playing of the strongest music I have, no one must move at all, merge with the ground, be embraced by it. Then the same music again, this time you can move, but not everybody did, not by a long way.

Examo writes: What a tremendous festival we all shared together. A new gift you bring to us, a new brick of life inspiration, among a myriad of others, nourishing my life at your side. My huge thanks to you IS the experience. Love of Life Ahead! Examo.

Ramari writes: What a great summer festival! Unspeakable joy. The whole space full of it. Bubbling, nonstop. Pure happiness. And with it all beauty included. Love was shining out of every face. Infinite moment. All my thankfulness to you! LOVE Ramari

After it was over we drove, with daughters San Chi & Wu Chi, to Frankfurt, where we met up with other members of the family living there and around: daughter Buji with her 10 month old baby, Ela/Pietra, and her partner Patrick, Patrick's Mum, Kali (mother of Buji) and Boaz, and son Madi, right in the midst of his end-of-term Uni exams, snatching a couple of hours off from his serious preperation studies, to be with us.

By 9 we were all tired, except, fortunately, for Mishka, who drove us the 280 kms home in just 2 hours, whilst the other three of us slept like babies, till we pulled in at home in UNACHO.

Ready for the kick-off of the new OPT7. Which still grows even after we started!