It took place, again, in Gut Alte Heide, a very fine therapy group centre, with a great host, Peter (whom we may soon see in a seminar), terrific and enormous accommodation for me, enabling me in the evenings to invite a few people, after dinner, for a glass of wine with chats, as I often do, when possible, at residential groups...

But before those T&R days, I was for a day and a night, not far away from there, at a very active spiritual centre, The Open Sky House, which lies under the guidance of a guy named John David Satsang.

Formerly he was known as Premananda, a name he received from a teacher called Papaji to whom he went, like a number of other sannyasins, after Osho died, staying with him some years.

It's a very rich centre, housing 20-30 people, with lots of visitors, not only for J-D's regular satsangs - often then offered on You Tube, and elsewhere, but also for musical evenings with wellknown musicians, also art displays from local painters, plus from time to time, trips with him to India and so on.

Some years back, in 2010, as Premananda, he had produced a book (not his only one) called Blueprints of Awakening - European Masters, 14 of them, and I was one, so we had met up here for that interview, and also another couple of times too, here and at his place.

He, with 3 assistants, picked me up at Cologne train station, full of welcome - and they immediately starting making a video of my arrival, shooting still pics too - out of the station, and then in front of the fabulous cathedral that is there in that town, and into the waiting Porsche Cayenne, for the 40 mins drive to their centre.

After a bite to eat there and a coffee (and an allowed bidee within), I was escorted to the lecture room, where about 35 people were sitting and singing mantras along with a leading lady singer accompanied by some musicians.

Then it was my turn, with J-D, sitting exactly in front of me, before all the others, and feeding me with enquiries, into a talk, which later included questions from others there. That took about a couple of nonstop hours.

Then it was dinnertime - for all of us together in a large dining-room - and then back we all went to the Talk Room for a repeat, for another couple of hours, everything again recorded, everything on video, lots of clickety-click fotos throughout.

Bedtime. There in a B&B which is part of the domain, usually full, and which helps to finance the place and the Work going on there.

In the morning at breakfast - which I cooked there for myself (under video!), it was more chats, more questions, more video, more fotos - until I was driven, around midday, from there to Gut Alte Heide, where the early-birds of T&R had already arrived.

At 15.30 we kicked off, but not as usual. The effect of my time with J-D and his guys had shifted my centre of gravity quite radically. There was no way we could set off in the energyspace directly - nowhere near! I was elsewhere, and therefore elsewhere with them and in them too. This was quite evident to all. But it was clear it did not matter. There we were all together, and that was what mattered, as they all assured me, after I told them about my time at J-D's. Towards the end of my sharing of this time there, one T&R member asked me if I had done any energywork with them. "No way!" I said: I had to be where they were, not they with me where I was. To me it was quite clear that this was what was called for...

That different style of interaction continued to some extent throughout our time together.

Maybe it influenced the entry into our time together, for really the first time ever, of the quality of contentment. How great an achievement that is! And it can be totally independent of the spiritual path - the feeling gained that everything in one's life is simply okay as it is, nothing spectacular there, nor needed, a contentment independent of any achievement or delight coming into one's life. A great achievement in itself. This subject was put together in a short 12 mins talk I gave there: I Only Be Content Know. This strange title is taken from a sign standing at a Japanese temple, and brought back to me a long time ago by Govind. And then it became a further subject of discussion and feedback in our group.

Then I also introduced this subject back here for our home team in darshan on Wednesday last, first playing the short talk I gave in T&R, and then with responses from the guys here. One response that came was from Vandan who said that he felt a long way towards being in that state in his life - and it's clear to me that he is right about that. Mishka asked, "Isn't that being at the source?" And I said Yes, but without the cosmic connection and the bliss that goes with it...

You give all the answers in your teaching and bring me glimpses of this reality and the way to find it in the seminars. It is more powerful and life-changing than anything I have ever met. Your talk about being content was a much wanted and needed teaching for me. Shanti

It feels each time to be exceptional and extraordinary, this time for example with you sharing what you had experienced the day before and opening our circle and making space to take in the people you had met, nothing to be excluded, and this is freedom, just being with. Astaranda

Again I was filled with all the teachings that came up, also in me after the many strong sessions in this leg, especially the theme of contentment...Sadhan

I had the overwhelming experience to be whatever you brought up...stillness, contentment, bright golden or white light, feeling myself alone in the room while being aware of the presence of the others and energy melting and connecting all of us. Teresca

At the end of this time together, as we danced our way away, with all arms raised to 'that' track, singing "Yes I love you!" - then, right there, then, I felt myself to be as the man sings in that Anathema song, "I was peace, I was love, I was the brightness."

Our last union together is in June, here at UNACHO. Then in October will start the next MB seniors group, Coming Home, also here at UNACHO. Details of where and when the 5 sessions are, are available on application to join this very special group.

Next up for me is Belgium, for the first time a 2nd group there in the monastery - arranged because of the great enthusiasm in that country for my work...
Also that same weekend Mishka is giving a dance workshop in Prague, one of several chances to catch her and her dance-work this year.

At the end of April, I am in Berlin - this time at a new centre, the Buddhist Centre there, which is I hear very beautiful - as is too the huge grouproom there - able to hold more than a 100 people - a big jump from the therapy centre we have been using for the last few groups there - which was all rather cramped. But no longer! So, come and check it all out, in this great city. The bookings for the (very) special group in Corfu at the end of May continue to grow. If you are eyeing it up, best to book now whilst the flight costs are much less than later.

It's great that Spring seems to have arrived, not only officially but actually. Blossoms burgeoning everywhere, also in our garden here - in front of me as I now write this blog. 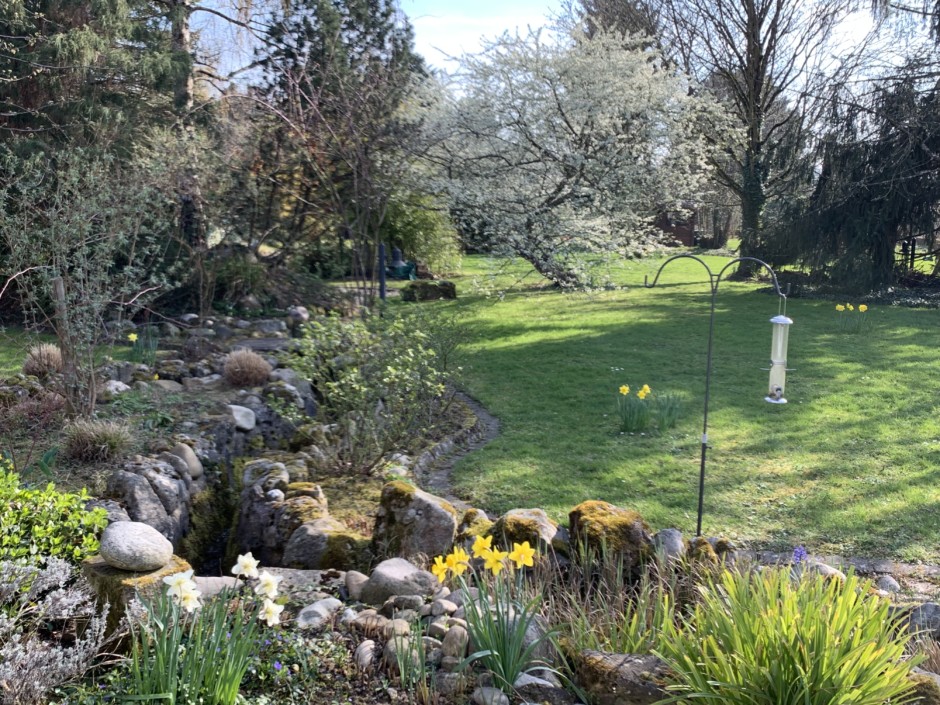 You can share in this Nature here at the Easter Festival here, also in April. Also share in the Energy that is always here at Wild Goose Headquarters, energy which is naturally being added to, every day. Usually there is a great exchange between our home-team and group members on such occasions. Also with the extra helpers and guest cooks who come to join us at these times.

And also, magically, as I finish this blog, our brown squirrel is not only cavorting up the trees, as it has been, but just now was flying through the air from one tree to land on the thin branch of another tree, the whole branch swaying madly, the squirrel though not alarmed and clearly as safe and sure as houses!